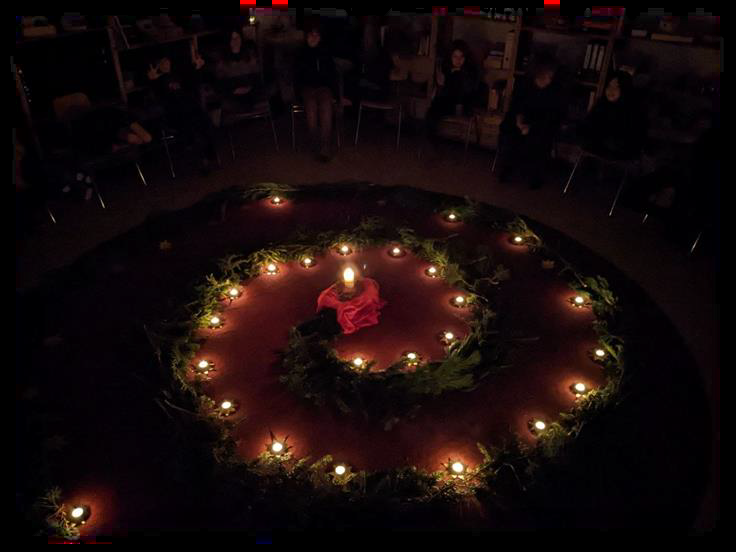 The learning companions in the Mittelstufe organised the Advent’s Calendar to count the days of Advent in anticipation to the celebration of Christmas. The children were required to put a candy or chocolate not exceeding 50 cents into one of the 24 socks. Each socks represented a day starting from the 1st of December leading all the way up to the Christmas eve. With the starting of the countdown, every school day a child was nominated across both the blue and yellow groups through a lottery system to unveil the gifts hidden in the socks before others in the class.

The children of the mittelstufe came together to celebrate Advent Spiral which symbolizes finding light in the darkness. The children were made to sit all around the spiral and one child at a time came to the centre of the spiral with their candle to light it from the big candle. After lighting the candles, children placed theirs along the spiral. A silent activity which helped children be in the present moment and feel the positivity and life energy as a group together.

The learning companions in the Mittelstufe organised a variety of offers in the weeks leading to Christmas. Other than preparing stars with paper, using beads to prepare garlands, baking butter Plaetzchen, celebrating Advent’s calendar and spiral, some of the children also prepared a candle stand with wood. The children worked hard to cut the wood and give it a star shape and they sandpapered it thoroughly for a smooth finish. It was very impressive to see the children who are not so used to working with wood prepare the candle stand quite independently and give it a near professional finish.

Just about a week before the Christmas celebrations, all the children from the Mittelstufe were given the possibility to prepare Butter Plaetzchen with the support of one of the parents at the school. The children wholeheartedly participated in the process right from preparing the dough, to flattening it and giving it different shapes to finally garnishing the Christmas cookies using chocolate and various other toppings. Once they were ready, they were packed into little plastic sachets and sold by children of the Mittelstufe at the Christmas Bazaar held in school. The images below will give you an idea of the step-by-step process which was followed to make the delicious Plaetzchen.
The following images will provide you with a glimpse of some of the activities which were undertaken in the Freie Schule Wendland across different learning groups in the weeks leading up to the Christmas Bazaar at the school as well as leave you with some memories from the last day of the school before the winter holidays.